Safe revivals are limited in this challenge. A Priest and a full group of 4 is recommended to clear the dungeon.

Rewards are randomly selected from all class pools. 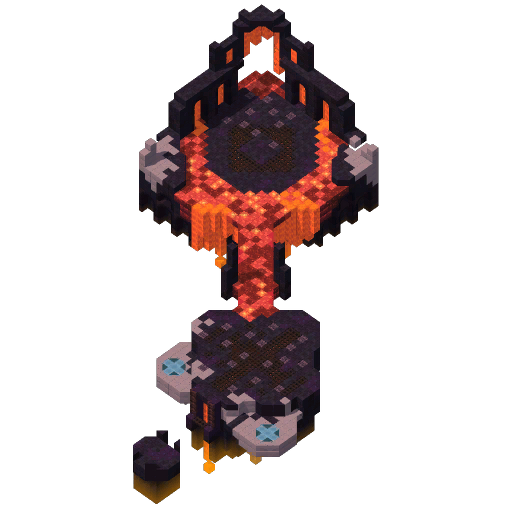 The ideal composition for this dungeon is 1 Priest and 3 DPS classes. However, it is also very possible to complete this dungeon without a Priest if the players are skilled or experienced with the dungeon.

In the first phase, there are two platforms on the sides of a bigger elevated platform. On these smaller platforms, there will be two faeries that have the ability to cleanse any burning stacks that you may have if you touch the area around them.

This first phase can also be split into two smaller phases. On the map, you will see these rocks in the floor of the bigger platform. Later on in this phase, these rocks will disappear, leaving holes that you can use to dodge certain attacks. But first, a description of the attacks...

The headbutt attack animation starts with Pyrros jerking back a little bit before suddenly dashing forward a set distance. Anyone hit by this attack will be knocked up into the air and take a decent chunk of damage. There’s not much to say about this attack other than to just dodge it by dashing to a side or behind him.

The burning charge animation starts with Pyrros rubbing the ground with a leg a few times before charging towards players at least 6 times. This is quite an annoying attack as it results in you having to chase after Pyrros to do damage. Getting hit by this attack knocks you back and deals a decent amount of damage, but more importantly puts a stack of burning on you for 15 seconds. This burn stack does a good amount of damage, so you will have to either remove it by touching one of the faeries on the smaller platforms, or deal with the damage by using potions or getting healed by the Priest. A small tip is that some classes have attacks that can be casted while jumping in a direction. This means that while Pyrros is running in a direction away from you, you can still attack him while jumping towards him. Getting hit by multiple charges can be devastating, since getting hit will add another stack of burning, while refreshing the burn duration.

The fire breath animation starts with Pyrros making a small circle animation with his head while giving off a high pitched sound, before shooting fire in a cone in a direction. Each tick of this attack will give a stack of burning, so make sure to dodge this.

This attack is similar to the previous fire breath attack, except that Pyrros will start the animation by standing up before coming back down and shooting fire. He will shoot a second fire breath right after the first one at a slightly different angle, so watch out for that.

This attack starts with Pyrros jumping up twice before slamming down, knocking everyone back slightly before shouting, stunning people hit by the shout for 5 seconds. This attack can be avoided by either jumping onto the smaller platforms where the faeries are, or by attempting to jump off the map and climbing on the side of the platform. Even if you don’t manage to climb and fall off the map instead, you will lose a little health but be teleported back where you jumped off from. Dodging this attack will allow you to avoid the stun and not miss out on a few seconds of DPS.

When Pyrros goes to the corner of the platform, watch out for a tail swipe attack. He will move his tail to one side and hang it there for a moment, before swiping across the map quickly. To dodge this attack, you can either hang back out of range, sit right in front of Pyrros, or hang onto him. The safest and easiest option would be to hang onto him. After the tail swipe has happened, you can let go and attack while falling with certain abilities (Wizard Arcane Blast for example) to maximize DPS.

Pyrros will start the animation by looking back before raising his tail up and slamming the ground in a cone behind him. He will slam the ground a total of three times, each covering a third of the map, with each slam dealing damage and knocking you back. Take care not to stand near the side of the head in which the tail slam is landing as the system also counts as being hit by the tail.

This animation starts out similar to the AOE Stun attack because Pyrros also jumps. However, when jumping Pyrros will kind of spin around before landing and rolling on the ground. To dodge this attack simply get out of melee range.

When Pyrros does its second AOE Stun attack (around 70% health usually), the rocks in the floor will disappear, leaving holes in the platform. These holes can be used to dodge attacks. You can hide in these holes to avoid the Tail Swipe, the Fire Breath attacks, Headbutt, the Fire Charge, and a new Laser Beam move. Do not attempt to hide in a hole to avoid the Triple Tail Slam or the Roll, since they will still hit you while you are in the hole. Note that when you’re in these holes, some of your attacks will not hit, as the altitude is different compared to that of the boss. Try to figure out which of your attacks will still land, so you can DPS while dodging the attacks. For example, Wizard’s Fire Tornado will still deal damage when cast from from the hole.

Pyrros will look towards either the left or right, pausing before shooting a laser beam that will sweep across the platform. This laser beam really really hurts and needs to be dodged, either by going into the holes on the platform, jumping off the map, falling onto the smaller platforms on the sides, or by dashing past it. Yes, you can dash past the laser beams, but the timing is a little difficult, and only certain classes are able to do this. Getting hit by the laser beam will knock you back and deal a ton of damage per tick. Normally, you would get one shot by the laser beam, but you can survive if you get hit by only one tick as a result of dashing for example.

One trick is to stand right behind Pyrros and pay attention to the starting position of the laser. You can continue attacking while only moving 1-2 blocks. Start moving to the opposite side when the laser is approaching near the middle.

Once Pyrros gets to around 35-40% health, he will dash towards the center, and then dash once again to the lava and break through the gates. If you time it right, you can hold onto Pyrros on the second dash (grabbing onto the first will knock you off) and ride him through the lava. I find that the easiest way to do this is to wait for Pyrros to do the first dash, and then dash into Pyrros (from the side or back) and grabbing onto him during the second dash. If you don’t manage to grab onto him, you will have to wait for the Faeries to come near the lava and wait for them to buff you, allowing you to walk over the lava without taking any damage while the buff lasts. Once your team has grouped on the other side of the lava, you will see Pyrros awaiting at the end of the map. Group up near the lava next to Pyrros on the left side and start damaging him.

The animation starts with Pyrros circling around and then shooting a huge fire breath that will cover most of the map and cannot be avoided normally, even by climbing up the pillars on the sides. This fire breath does not apply burning stacks, but deals an incredible amount of damage. To deal with this attack, everyone will have to group up and the priest will have to spam their heal to keep everyone alive. It’s either that, or having a knight use their team block for you. Additionally, if you do not have a priest or if your knight blocks are on cooldown, you will have to avoid the damage by dashing back to the left side and jumping onto a small platform on the lava or hanging onto the wall. Here are examples of running to a safe spot and using a Knight to survive through the giant fire breath attack:

This laser beam attack is the same thing from the previous phase. To avoid this attack, you can hide in the hole or dodge through the laser by timing it correctly. In this clip, you can see me dashing through the laser without taking any damage (only certain classes can do this, and with precise timing). If you look to the left, you will also see my teammates dodging the laser by climbing up the pillar, which is another option, but it's easier to just go into the hole that is available (you do not see a hole in this clip because it is an old one before they added it).

Pyrros will stand on his hind legs and start shooting balls of fire at players. Once the ball reaches the player, it will leave a circle on the ground for a second before exploding, knocking up players and leaving a burning stack. Make sure to be careful not to go into a hole for this attack, as Pyrros can shoot the fireballs into the holes, with the circle indicator being invisible since it’s hidden underneath. Even if it’s in the hole, you can be above the circle and still get hit by it when it explodes. It may be helpful to watch where the balls are going to as they fly to get a sense of where the circle will appear. You can also block the fire bombs by hiding in a corner as seen in the video below. This safe spot can be used by Heavy Gunners, Wizards, and Priests, as they can attack from behind the pillar without being in any danger of the Fire Bombs.

At around 20-25% health, Pyrros will unleash the AOE Stun Attack. This attack can be avoided by hiding in the hole. Afterwards, all the holes in the floor will be uncovered. In this phase, Pyrros will stop doing the giant fire breath attack, and go back to using a mix of all the previous attacks, not including the map-wide fire breath attack, headbutt, and burning charge.

Community content is available under CC BY-NC-SA 3.0 unless otherwise noted.