Parties are organized group of players using the party system in MapleStory 2.

Parties allow you to team up with up to 10 players, though most shared content, noticeably dungeons, will limit you to 4 or less. When you are in a party you can view your party members status, health, level, etc. You can create/add people to a party by right-clicking a nearby player and selecting the "invite to party" option. You can also create/add people to a party by using your friend list. By simply right-clicking a friends name, and selecting the "invite to party" option. Parties are can be created randomly when you press the "find party" button when doing a daily dungeon, or when you are queuing for a specific dungeon. Sometimes parties will be needed to clear certain quests where it is required to be in a party. Drops from monsters are individally generated, so even if you are in a party it is not possible to directly share or steal loot. Parties automatically gain a Fishing buff that increases your chance to catch prize fish as long as players are in the same map instance. This buff scales three times up to a maximum of 5% for four players. 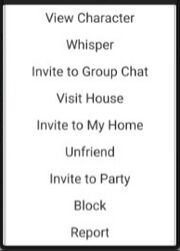 This picture shows all the player options Maplestory2 provides.

At any point in time, the leader of a party can upgrade the current party members to become part of a new, permanent Club. A club is started upon being created from a party and is from then on considered a separate entity. The leader of the original party becomes the leader of the club. Similar to parties, clubs can have up to 10 members, and a character can be a member of up to three clubs at a time. Clubs cannot be disbanded and the leader cannot remove people from them, however anyone is free to leave it at any time. The leader can invite new people to the club, change the club name and set the current club buff. The club buff is the main benefit of being part of a club and consists of either a Movement Speed, Fishing Experience or Performance Experience buff that the leader can switch at any time. The buff is active only when at least two club members are together in the same party and in the same map instance and scales with the amount of members fulfilling this criteria.