Loose your arrow into the heart of evil! A member of the Green Hoods, the Archer works tirelessly to protect Henesys - and all of Maple World.


This hero rains arrows on their enemies with a bow.

The Archer takes the smart path to fighting as he defends the woods as part of the Green Hoods, firing arrows from afar while his pet eagle does the messy stuff.

As a DPS, the archer is proficient as a mid-ranged mobile harasser that excels at sustained damage while navigating across the battlefield. They can deal with several enemies at once with several AoE and crowd control abilities. However, archers don't survive long in melee combat.

This is a PvP build that is an edit by Zomagoras of /u/oldsaberreddit [1] 's build that emphasizes on CC and keeping a distance from the opponent. 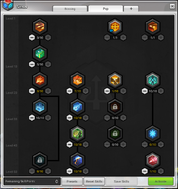 The main strategy with this build is to use Ice Arrow to keep the opponent slowed and at bay. If they get too close you can use Bow Swing to know them back or Evasive Salvo to dodge away. The three basics skills Arrow Stream, Arrow Barrage, and Rapid Shot are generally not used as they don't provide as much benefit as the other skills.

Arrow Stream should be used when you can slow/stun an opponent or you need to regenerate SP. Although it may seem like a good idea, it is not recommended to open a fight with Arrow Storm.

Precision Shot is meant to be used at range if you can get it in without taking damage. The attack does a significant amount of damage and can be very beneficial if used right.

The stat points in Conditioning and Precision Shot can be moved around to skills like Bronze Eagle, Eagle Claw, Evasive Salvo or Screwdriver Shot.

It is not recommended to add anymore points than necessary into Arrow Stream, Arrow Barrage, or Rapid Shot as they aren't as effective in PvP.

This is a bossing build that focuses on maximum DPS and buffing party members. 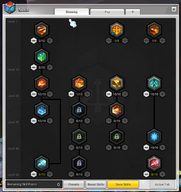 The main strategy with this build is to use Rapid Shot as much as possible and use Arrow Storm and Precision Shot when off of cool down. Rapid Shot is the main DPS skills for this build as it does more DPS using less SP. Arrow Stream workings well when used close to the boss, then you can continue to spam Rapid Shot.

Sharp Eye's is an essential part of this build as it ups your critical rate by 76 and Accuracy by 5 for 180 seconds. This effect also goes to any player that steps within the buff. It is important to use this skill when available to ensure maximum DPS.

Arrow Storm is a good skill to use when low on SP or you know a boss will be static for at least 5 seconds. It can be used on your character by pressing and releasing, but if you hold the skill down it will cast it at range. Something to note about Arrow Storm is that it can attack at elevations higher than where you cast it. For example, on Fire Dragon if you cast it from a lower platform or pit while Pyyros Fard is above it will still hit him.

There isn't too much room for adjustments here, if you heavily value piercing on your attacks you could take points out of Precision Shot and Sharp Eyes and move towards Agile Archer which grants % piercing.